Today’s Cosmos tour began with a 6am wake up call and a complimentary breakfast of spinach quiche, scrambled eggs, a custard croissant, ham, cheese, and an assortment of fruit pastries.

Our tour director, Ursula, guided us onto the bus and to our destination, the Castel Sant’ Angelo, where we paid the admission. Diana, a widow from Connecticut, accompanied Steve and I since she was on the Cosmos tour but elected not to go back to the Vatican, which all three of us had seen before in great detail.

This time we got to see the inside of the castle, which had an impressive view of the bridge below from one of its towers.

I especially liked the room with the harpsichord, since I play classical piano.

In the adjoining room housed an unusual painting of a maiden with a unicorn. 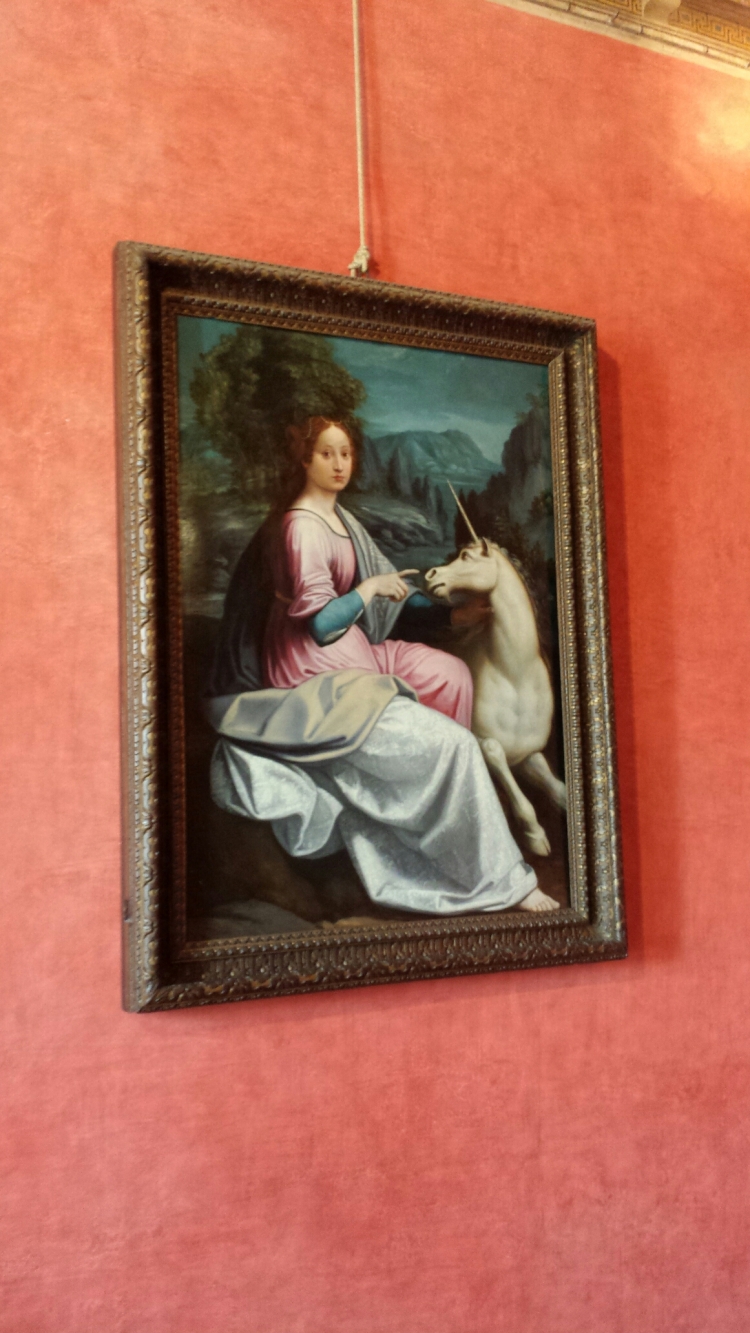 Ursula later told us the castle was where the popes could escape to if Rome was under invasion.

We had lunch at a rather touristy place and I was disappointed to taste the most bland red sauce I have had during our trip. However Steve ordered a Hawaiian pizza and said it was some of the best pizza he has had in Italy. 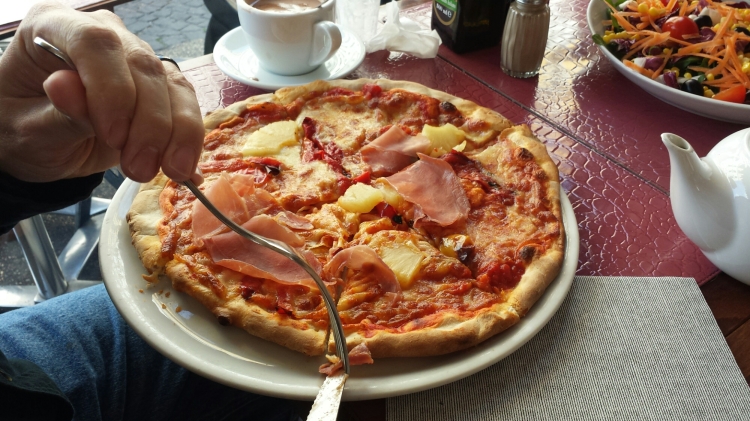 After lunch we finally got to see the destination that Steve and I have both deemed absolutely necessary to visit in Rome–the Colosseum. Our local tour guide greeted us and shuffled us in past the Arco di Tito. 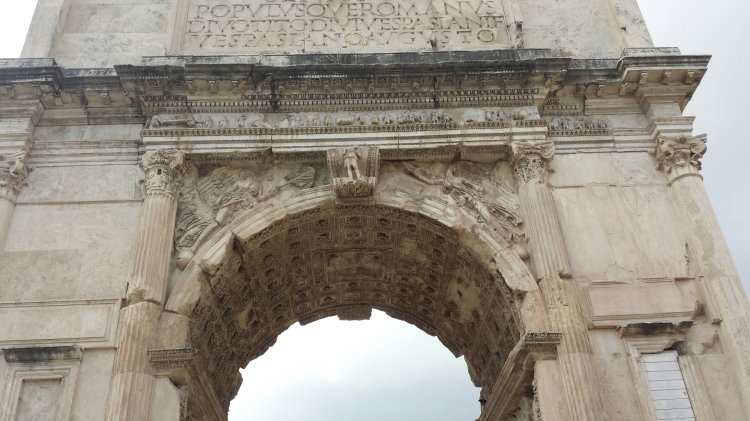 Once inside, I imagined I could feel the fear of those slated for execution at inside the Colosseum walls.
Our tour guide mentioned that lions, tigers, panthers, and other exhiotic animals from Africa and Asia were  brought by traders and sold to the Romans for the entertainment of the crowds. The pulleys hoisted the animals into the arena and the entrances were staged with fake props such as a cave entry way for a lion. 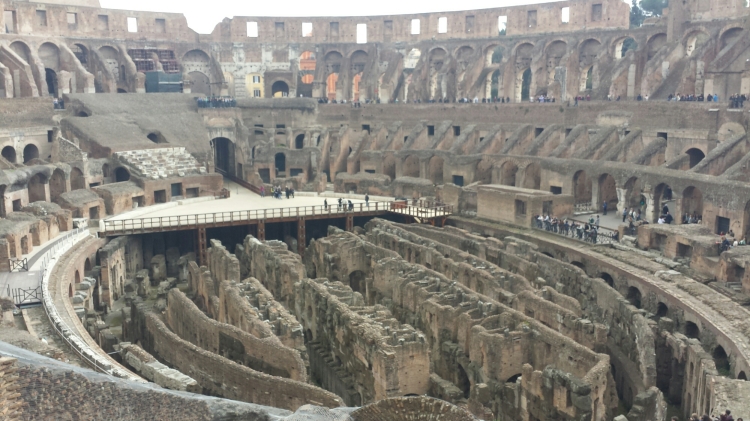 We proceeded to visit the Roman Forum.
Vestal virgins were condemned to be buried alive if they broke their vows of celibacy.

It was the hottest day we have experienced so far in Rome and I was getting tired because I caught Steve’s cold last night so I was grateful we had a chance to go back to the hotel to rest before our night excursion.

We visited the Spanish Steps, which is where fashion shows used to take place until the fashion shows were discontinued because the models kept falling down the slippery steps. I carefully made my way down.

Ursula led us back to Trevi Fountain, where Ursula gave us the full story of the wishes. The first wish is to return to Rome. The second wish is a personal one. The third wish is optional…but you can wish to be married or divorced.

Dinner included a five course meal starting with bruschette al pomodoro. A flute player and guitar player entertained our tour group with several American love songs and a handful of Italian ones.
The guitar player who sang reminded me of my brother David because of his artsy black attire.

We enjoyed melon and ham. 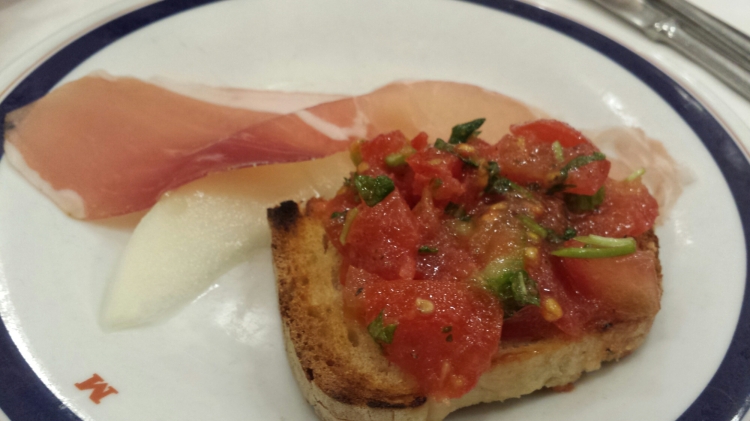 Chicken and potatoes with rosemary. 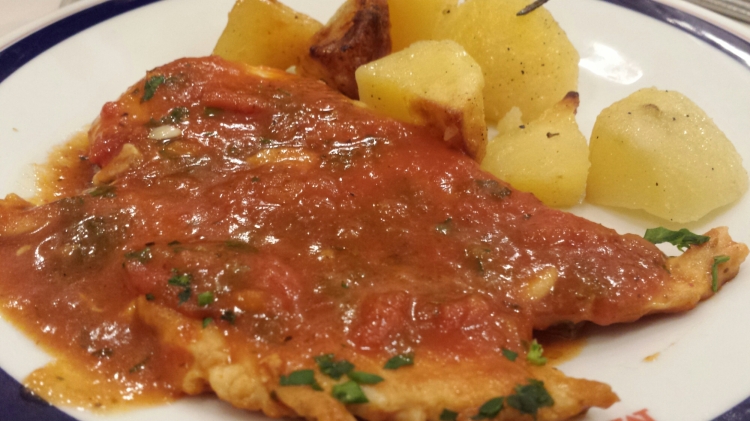 And as a special surprise, Ursula asked the waiter to bring us three roses and a piece of cream cake drizzled in chocolate to celebrate the honeymoon Steve and I were finally able to enjoy!

One thought on “Day 13: The Colosseum and Roman Forum ”