Steve and I caught a cab to our Pompeii tour meeting stop.

It was chilly in the morning so we purchased some hot tea with honey and lemon and I bought a custard croissant later.

We enjoyed looking at the statue of Posidon. 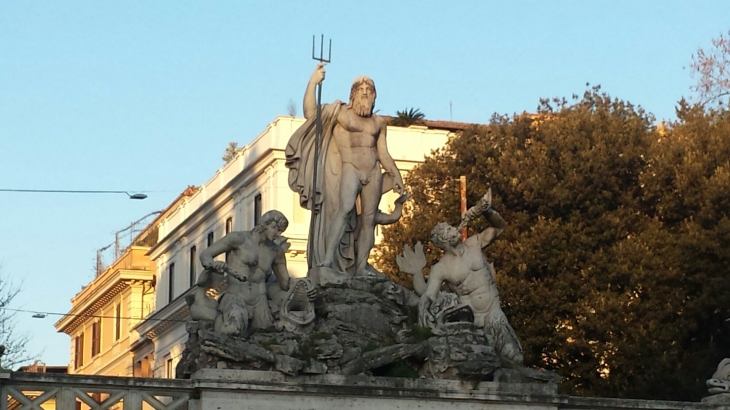 The Egyptian looking monument with hyroglifics in the center had a film crew working on what looked like a student-made independent film.

Our tour bus took us about two hours into the Napoli area. Our guides, Enricca and Jonathan, described the story of Pompeii and how the volcano exploded and killed thousands of inhabitants over three days. Toxic gas, 400 degree sheets of heat, and raining stone killed some people instantly and others died slowly from suffocation. As an empathetic person, it was difficult to see the caste of a young 20 year old woman covering her face. 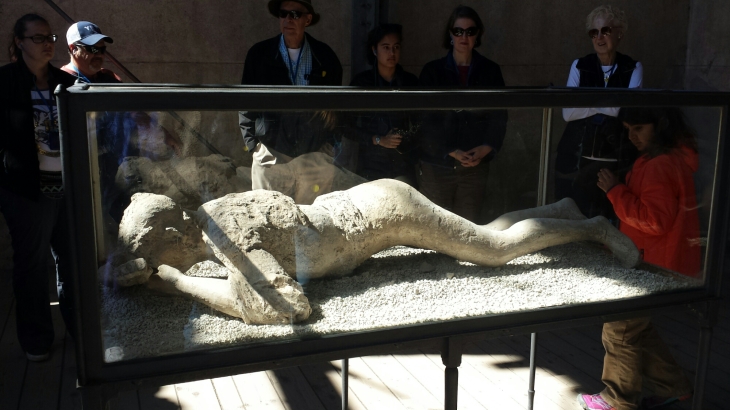 Another man was sitting curled up, covering his face. The skeletons of the people are encased in the ceramic castes. Normally there are several but many were away being restored.

A dog was chained and afforded no opportunity to run.

The frescoes of the brothels were preserved fairly well. Weeks before the catastrophic event, the people of Pompeii had celebrated a festival for Volcan, the God of fire.

Lunch included pizza Margarita and salad at a Napoli restaurant.

After lunch we returned to the bus and visited a museum that had many statues and an impressive Egyptian mummy exhibit. We saw a mummified crocodile!  I hadn’t slept well the night before so I was tired but still enjoying our tour and chatting with the other Americans on the bus. There was a single dad with his father and son sitting next to us. I traded crazy cat owner stories with the boy and Steve shared his scooter adventures.

Back at Hotel Fleming, I had pasta and ricotta for dinner around 8:30pm. People dine late in Italy.