Home » Family » A Eulogy for My Dad

A Eulogy for My Dad 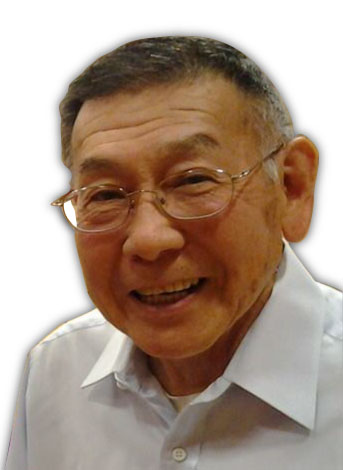 This is the first Easter Sunday my family will celebrate without my dad. He passed away on 3/14/16 after a long battle with Alzheimer’s. Here is the link to his obituary. For those who couldn’t make it to his celebration of life, I am sharing the eulogy I wrote for him and the recording of the funeral. We will never forget him.

Thank you for being here to celebrate the life of Henry Akao. Henry was a kind, gentle, quiet, intelligent man. He worked hard and cared deeply for his family. We would like to share with you some stories from his life, a life well lived.

Henry met his wife, Rita, at a “parents without partners” dance on a cold January night in Dearborn, Michigan. Rita and her friend, Joan, braved an icy drive down Plymouth Road so they could attend the dance.  When they arrived, Rita set her eyes on Henry for the first time. He was wearing a three-piece suit he had picked up that morning. She stood next to him until he asked her to dance.

On their first date, Henry took Rita to the Detroit Institute of Art, where he bought her a membership. Afterward they decided to eat dinner at a sushi restaurant. The waiter took one look at Rita (an Italian woman on a date with a Japanese man), and said, “No steak; just sushi.”

Henry and Rita later married and had Amy and Gina, girls 21 months apart. Henry worked all his life as a structural engineer to support his family, allowing Rita to be a stay-at-home mom, which is definitely a full-time job. Every day Henry would come home from work, the girls would run to the door, call out “Daddy!” and give him a kiss on the cheek. His sister, Ruth, overheard this ritual while she was on the phone once and commented, “Who is it? Did the king come home?”

During his life Henry ran eight marathons and several Bay-to-Breakers races. Once he even ran through a hurricane in Michigan. It was sometimes difficult to find Henry after his marathons, even if the family planned ahead to meet him under the bleachers marked “A” in Golden Gate Park, where one year they listened to Ray Charles and the “Uh-Huh” girls sing about Pepsi Cola. Henry owned countless pairs of running shoes and would jog to work while he was training for his races. His boss once commented, “You’d think he’d be too tired to work once he got there,” but he never was, and he never complained about the long hours engineers often work to make their deadlines. He was always willing to help the girls with math homework, and even if they couldn’t understand how he got to the answer, it would always be the right answer.

Henry’s eldest, James, took after his father and graduated from U.C. Berkeley with a Ph.D. in Math. Henry, Rita, Amy, and Gina would often visit James in Berkeley, where they’d crash on the couches in the living room of the rental home James shared with his roommates. One of his roommates, Dan, would bicycle around campus and honk the horn on his bike as he wheeled it past the sleeping visitors.

Henry valued education. He would say to his daughters, “Study hard, get an ‘A’, become an astronaut.” Gina followed his advice and graduated at the top of her class in high school. At Gina’s high school graduation, Henry enjoyed spending time with his grandson, Davis, and his daughter, Mitsu. Even at a young age, Davis was bright. During a family trip, Davis could name all the makes of the cars he passed by, such as Chrysler, Ford, and Honda.

Henry was devoted to his family. On Valentine’s Day he would bring three roses: one each for Rita, Amy, and Gina. He would pick up chocolates from Ethel M or Hershey’s bars to bring home to the girls. When they needed cars he provided Hondas. He taught his girls how to drive a stick shift on the back roads of Reno. He paid for their college educations unless scholarships covered the costs.

Part of Henry’s dedication to higher education came from his upbringing. He grew up on an apricot ranch that his father managed in Winters, CA. During World War II, Japanese-Americans were sent to internment camps, and Henry and all of his siblings (Ruth, Nancy, James Isamu, and David) were separated from their father, Henry Hiroshi Akao, because the government sent the father to a different state than where the rest of the family was allowed to go. Henry and his siblings were given wood to make their beds. Because he was so young, Henry later recounted that he thought the internment camps were summer camps, because all of his cousins were there. Once the family was allowed to go home and the war was over, Henry studied hard so he could be admitted to U.C. Berkely. He later obtained his Master of Science in Engineering at the University of Washington.

He worked in many states: first in Michigan, where his children, James and Mitsu were raised, and later in Citrus Heights, where Amy and Gina went to elementary school, and then in Reno. For a few years Henry commuted to Elk Grove, where he lived with his colleague, Francis, while he took a position in West Sacramento. Rita would commute weekends to visit Henry during that time; they would take walks in the evenings by the lake and watch the mud hens. She later said that she wanted to be like the mud hens, who would ride the waves even during storms. A job at Miyamoto International, an engineering firm that specialized in earthquake safety, brought Henry back to Reno, where he later retired.

Henry continued to take engineering consulting jobs after he retired. Blueprints and engineering books collected dust in the garage. He and Rita would visit the World of Concrete conventions in Las Vegas in order for Henry to maintain his professional development credentials for his engineering license. When Henry began displaying the stages of early-onset Alzheimer’s, Rita hid Henry’s engineering stamps so he would not be tempted to work, even if he would have liked to.

On September 25, 2015 at Gina and Steve Decker’s wedding, Henry was delighted to meet his new grandson, Michael Henri Akao, adopted by James Akao and Margaret Samyn.

As his Alzheimer’s disease progressed, Henry slowly lost motor skills, but he never forgot his family. Walking, showering, and going to the bathroom became difficult as the cruel, reverse childhood of the incurable disease set in. For 12 years Rita worked around the clock to ensure that Henry got the utmost care. Toward the end she made sure the hospice workers and caretakers would watch over Henry to make him comfortable during his last weeks.

On March 14, 2016, Henry passed away at 2:44 AM. He was with his beloved wife, Rita, and his youngest daughter, Gina and a caretaker, when he took his last breath in the home he worked hard all his life to provide for his family. As the final breaths approached, the pauses between breaths became longer and longer, long enough to recite the compassion mantra silently:

May you be safe, and protected.

May you be free from suffering, and the causes of suffering.

May you live a life of kindness and ease.

Henry was not in pain when he died, and he did not suffer when he took his last God-given breath.

Before Henry died, a chaplain from Circle of Life Hospice anointed his head with oil and recited Psalm 23:

The Lord is my shepherd; I shall not want.
He maketh me to lie down in green pastures: he leadeth me beside the still waters.
He restoreth my soul: he leadeth me in the paths of righteousness for his name’s sake.
Yea, though I walk through the valley of the shadow of death, I will fear no evil: for thou art with me; thy rod and thy staff they comfort me.
Thou preparest a table before me in the presence of mine enemies: thou anointest my head with oil; my cup runneth over.
Surely goodness and mercy shall follow me all the days of my life: and I will dwell in the house of the Lord forever.